<br />
This pretty filly was chosen as an elite foal on the foal show at Hof Sosath.<br />
The assessment speaks for itself and was quoted by the jury as follows: ”Very nice feminine expression, tremendous charm, very nicely done in the topline, lovely neck, great face and moved here with quite a lot of drive and translation throughout the body.”<br />
The foal goes back to the direct mother strain of Nigretti, one of the most successful mother strains of the Hanoverian association. Among others, 44 licensed stallions have been produced, such as Wentrup, Converter, Catan or Radisson, to name just a few of the most successful stallions. In addition, 112 state premium mares and 152 auction horses and foals have sprung from the Nigretti line. The line is also very successful among sport horses. Among the most famous names are Tannenhofs Gar, Don Dooley or Friend of Mine in dressage, as well as Global Leroy, Volvo's Dollar, Balermo or Calisto Blue 3 in show jumping. This strain stands for performance and hardness.<br />
The father of the filly, Moreno, convinced on his licensing in 2019 and was named 1d premium stallion. He won his first riding horse test with an overall score of 8.8 and qualified as Vice-champion of the Oldenburg championship 2020 for the German championship in Warendorf. In the final of the 3-year-old stallions, he finished 5th. He finished the stallion performance test with a final dressage score of 8.58.<br />
The offspring from Moreno's first foal birth cohort were consistently rated as very athletic, smart, and equipped with an incredible amount of drive and dynamics.<br />
In addition to Moreno, the mother strain has already produced numerous successful and licensed stallions. These include Dr. Doolittle under Markus Gribbe and St. Emilion under Dorothe Schneider.<br />
The mother-father of the filly is For Romance I from the mother strain Voltaire. For Romance I was named Champion Stallion at the 2011 licensing of the Oldenburg Association. In 2019, he was named the main premium winner as well as the VTV Dressage Stallion of the Year due to his own performance. The quality of For Romance I's offspring speaks for itself! 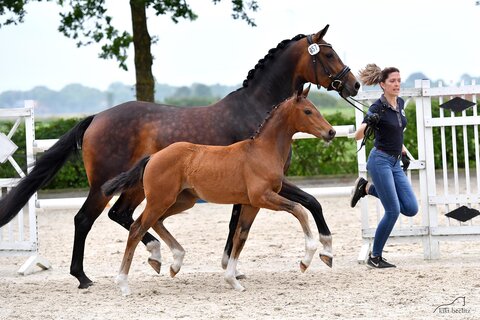 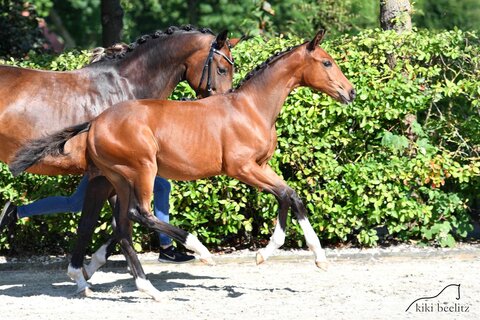 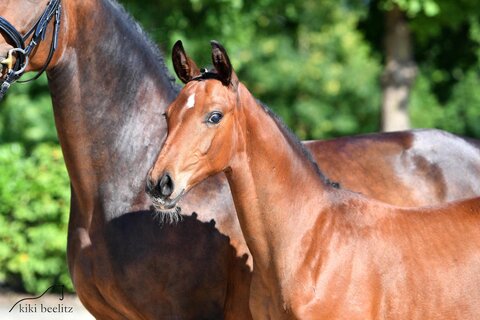